Separator is an element of a FlexiLayout which describes a vertical or horizontal separator.

Separator elements are marked with

The properties of a Separator element 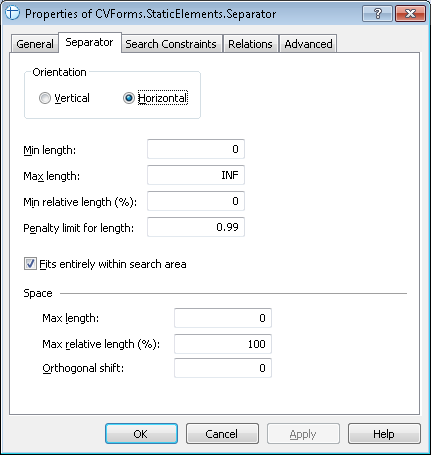 Sometimes separators on document images become distorted, disjointed or skewed due to low-quality printing or scanning. During pre-recognition, this may cause the program to detect multiple separators instead of one.

The Space group contains options which you can use to tell the program when it should include multiple separators in one hypothesis.

Separators do not usually have fixed positions on unstructured documents. Since they are optional design elements, a designer may choose not to use them at all. For this reason, separators are rarely used as reference elements in FlexiLayouts. The most common function of separators in documents is to separate the text from adjoining fields, so the search areas of Separator elements tend to be small.

If you use separators as reference elements, you should check whether they were detected during pre-recognition. To make sure that the program can detect a separator on all test images, once pre-recognition completes, click the

button on the toolbar to highlight the separators, and then look through all of the test images and check the location of separators. This check is especially important if the separators are thin, because in this case their detection will depend on image quality and the scanning settings.

An overview of element properties